How the IRS is Increasing Scrutiny of Small Businesses

In 2008, the passage of the Housing and Economic Recovery Act included provisions intended to provide the IRS with more immediate and comprehensive access to business sales records. In particular, the law required banks and other payment providers to begin filing Form 1099-K in 2012, which lists year-end gross payments made to merchants for gift cards, debit and credit cards, and e-commerce sales.

In 2013, the ramifications of this new reporting became clear, and if you're a small business owner, you should stay aware of this information as you implement effective bookkeeping services.

The first clue regarding the IRS intentions came in 2013 with a wave of Notification of Possible Income Underreporting letters sent to small businesses.The letters began with a statement that the business's gross receipts may have been under-reported, and tied that to a request "to explain why the portion of your gross receipts from noncard payments appears unusually low."

Although the threshold that triggered these notices remains unstated, it is evident the fundamental concern was businesses failing to report all cash revenue from sales and other transactions, and the IRS came to this conclusion based on information analysis of the new merchant provider database.

The efforts have not been without political controversy, and indeed, many of those targeted said the IRS calculations appeared to be flawed. Among other concerns, it appeared to count gift card amounts and sales tax paid as revenue when constructing its expected cash/noncash proportion, though those numbers are not usually taxable revenues. Nonetheless, because the action was a request for information rather than a statement of liability, the letters and scrutiny of small businesses continue, and don't necessarily need to be based on accurate assumptions.

In response to the letters, businesses must file Form 14420, which is the Verification of Reported Income form. Though the criteria behind the requests for information may be overly broad, the takeaway for small business owners is that those who receive the letters need to have accurate bookkeeping services and associated sales records to provide the requested information and potentially save themselves from increased tax liability.

The IRS has promised to review its procedures in this area and stated that it was "taking its first early steps" in putting the new database to use.

These merchant sales efforts are among many tactics in IRS attempts to reduce the tax gap, defined as the amount of verified tax liabilities that are not paid on time by both individual taxpayers and businesses. The agency's calculations are often many years behind, so its most recent estimate is for 2006, in which it found an overall tax gap of $450 billion.

Perhaps even more important from a business owner's perspective is the voluntary compliance rate, or the amount of taxes that are paid up front and on time, without requiring additional action or enforcement from the IRS. That rate stands at roughly 84 percent, a number that has been fairly stable over the years. This means that, as far as the IRS is concerned, nearly 15 percent of its total tax collection unequivocally requires them to question reported incomes. And when you remember that owning a small business is a well-known flag for potential income discrepancies, it's very clear that your records need to be in pristine condition.

The final results of the IRS foray into "big data" analysis are yet to be seen, but engaging accurate bookkeeping services is a good step to make sure you're prepared if you become the next small business owner to receive a request for information letter. 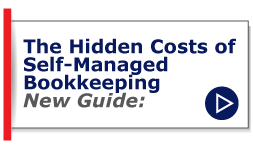